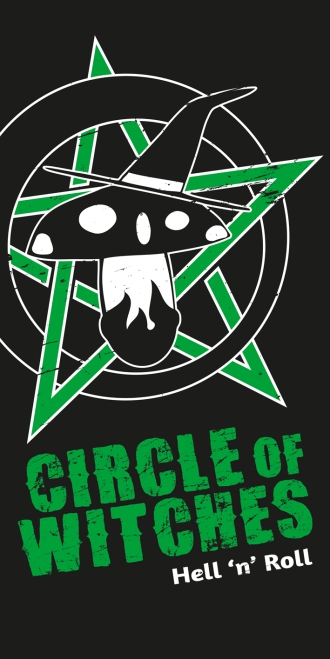 CIRCLE OF WITCHES is a heavy metal band with doom influences born in Italy in 2004 by the will of Mario HELL Bove (lead voice and guitar).

In the early days, the band played a raw stoner metal, digging deep into the ‘70s hard and heavy. In 2012 they came to a turning point by having their very first European tour with several dates in Austria, Spain, Uk, and producing a video live in studio.

In 2013 they joined forces with Polish producer Bart Gabriel (SACRED STEEL, CRYSTAL VIPER, BURNING STARR) and sound engineer Mariusz Pietka (LONEWOLF, SABATON, MORTICIAN). They recorded “ROCK THE EVIL”, released under METAL TANK RECORDS in February 2014. CoW came back in Wien as the main band of the Rise of the Spacelord Festival, sold-out event. Years after, “Rock the Evil” song was enlisted in the “Dead on Time” original soundtrack, an American action motion picture featuring MICHAEL MADSEN and the wrestler COLT KABANA

2015 saw Circle of Witches touring twice in Russia with DORO and then with U.D.O., playing in front of more than 7.000 people. Later on, the band took part to some important festival like the German Metal Frenzy 2016.

In January 2016 the band closed down in ALPHA OMEGA STUDIOS on the Como Lake, to record the brand new full-length album “NATURAL BORN SINNERS” produced by Alex Azzali and Nicholas Barker (CRADLE OF FILTH, DIMMU BORGIR, TESTAMENT). This new chapter is focused upon the concept of riot and some rebels from the past like Lucifer, Spartacus, Anton Lavey, Giordano Bruno. This eleven track marked the path of heavy metal and doom influences, with a sound between Judas Priest, Grand Magus, and Candlemass. Released in May 2019, NBS was well-reviewed by the press and sold one hundred of copies during the first months.

Between August and November 2018 the Natural Born Sinners European Tour took Circle of Witches on the way of Hungary, Austria, Malta, Germany, and Italy with a dozen of gig. The pre-release tour joined also some important festivals like Agglutination Metal Festival and Malta Doom Metal Fest.